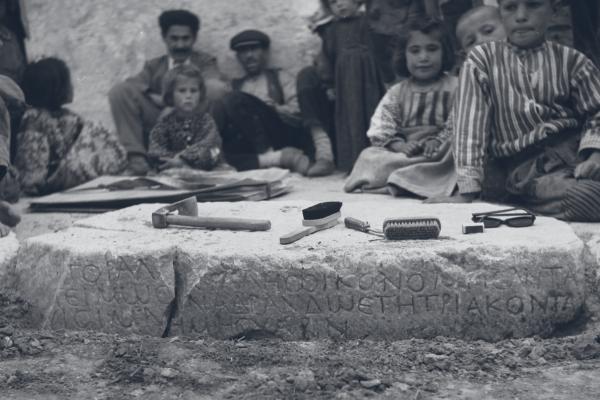 Equipment for making a squeeze (Anbararası, 1957). From the Michael Ballance archive.

The aim of the original MAMA project (1925-1962) was 'to make available facsimile records of monuments, mostly of the Roman and Early Byzantine periods, surviving above the surface of the soil in a number of selected areas’, with a particular emphasis on central and southern Asia Minor (Phrygia, eastern Karia, Lykaonia, and Kilikia). Eight volumes were published in the original Monumenta Asiae Minoris Antiqua series (I-VIII, 1928-1962); two further volumes were published by Stephen Mitchell and Barbara Levick as MAMA IX (1988) and X (1993) from the Nachlass of Sir Christopher Cox, collected for the MAMA project during expeditions in Asia Minor in 1925-6.

Aside from a small number of texts which appeared in short articles for the journal Anatolian Studies (MAMA XI 36, first published by Calder 1955; MAMA XI 45, published by Calder 1956; MAMA XI 176, published by Ballance 1969), most of the 387 monuments recorded in Phrygia and Lykaonia by Calder and Ballance in 1954–1957 were never published. The Calder-Ballance papers bequeathed to Oxford University in 2007 included a complete set of hand-written descriptions of the monuments recorded in 1954–1957. For several monuments, Ballance had produced careful line-drawings and preliminary transcriptions of the Greek and Latin texts. However, no commentaries existed for any of the monuments, and very many of the inscriptions had clearly not been looked at since they were first copied in the field. The entire MAMA XI corpus has, therefore, been edited ab initio for this website from Calder and Ballance’s photographs, squeezes and notebook copies. Click here for more information.