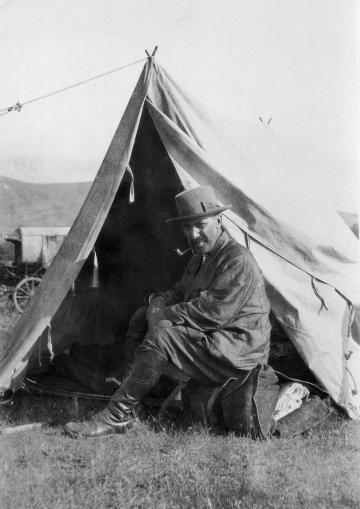 Sir William Calder (1881-1960) made more than seventeen archaeological journeys to Central Asia Minor between 1908 and 1954. He is best known for the early volumes of Monumenta Asiae Minoris Antiqua, a series that set a new standard in the publication of inscriptions recorded in the field, since the reading of every text was supported by a photograph, or an impression.

Born in Edinkillie, Moray, within a few miles of the birthplace of two older leading scholars of Asia Minor, Sir William Ramsay and J.G.C. Anderson, Calder studied at the University of Aberdeen before moving to Brasenose College, Oxford. Between 1908 and 1913 he travelled widely in Lycaonia, Phrygia and Galatia, collecting epigraphic and topographic material and developing a keen interest in the Phrygian language. After Ramsay’s retirement from the field Calder joined forces with W.H. Buckler. Two extensive archaeological fieldtrips, in 1924 and 1925, led to the publication of the first volume of Monumenta Asiae Minoris Antiqua which provided a systematic record of inscriptions that were visible above ground. Although Calder credited Buckler for collecting much of the material in the field, it was he who provided the commentary, and it was here that he expressed his interest in the early spread of Christianity in the region, and its widely different manifestations in the years before Justinian.

In 2009 the CSAD received substantial funding from the Walter Mellon Foundation to digitise the Calder archive to make it more widely accessible.