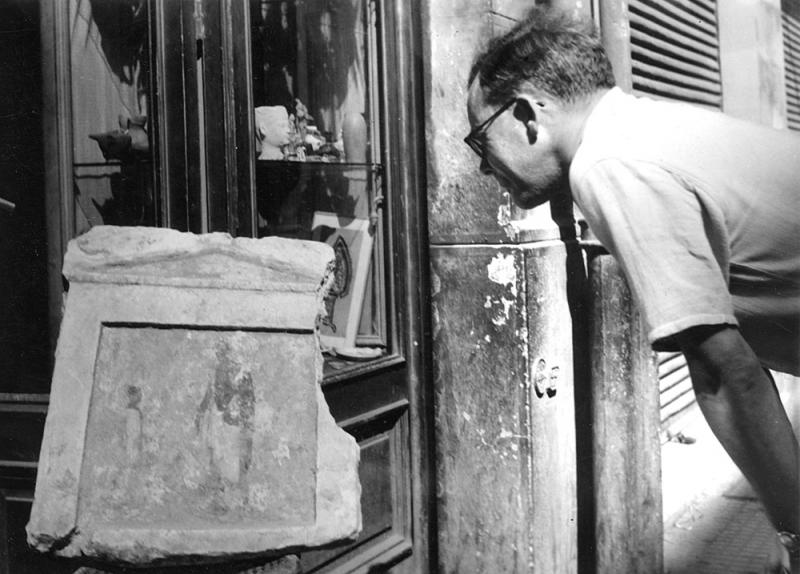 A pre-eminent historian of the Hellenistic age, Peter Fraser’s main expertise was in reading inscriptions in stone. He was born in Carshalton, Surrey and attended the City of London School before going up to Brasenose with a major scholarship in classics. His undergraduate studies were interrupted by the outbreak of World War II. He joined the Scottish Highlanders in 1940, and in 1943 he was parachuted into the Peloponnese as part of the Special Operations Executive, going on to win the MC in 1944 ‘for difficult and complicated negotiations.’ Returning to Oxford he wrote his dissertation on the epigraphy-rich island of Rhodes,Studies in the Epigraphy of Hellenistic Rhodes. The CSAD houses a collection of squeezes, notes and photographs of  Rhodes (many of which are deposited online), which were used to prepare his 1977 volume, Rhodian Funerary Monuments.

Fraser had learnt modern Greek in Alexandria, and this city was to become the subject of his three volume Ptolemaic Alexandria. He envisaged publishing a corpus of inscriptions of the Ptolemaic Empire, including its overseas possessions. The collection of his squeezes and photographs, detailed notes and typed drafts are deposited at the CSAD, and many photographs and squeezes from Egypt, are now available online. In 2013, the CSAD received an AHRC grant to produce an up to date Corpus of Ptolemaic Inscriptions from ancient Egypt, based in part upon Fraser’s accumulated materials. The new Corpus will be made available online during the course of 2019 and will also be published by OUP. You can find more details about the project here.

In the 1970s Fraser made three visits to Afghanistanin his capacity as Chairman of the short-lived Afghan Society, which was excavating the site of Old Kandahar. During these visits, he took photographs and squeezes of Greek inscriptions in Kabul Museum, and elsewhere. The British excavations aimed to uncover the presumed Hellenistic settlement. The most spectacular epigraphic find of the entire excavation, discovered in 1978, was a statue base inscribed in Greek, which provided startling evidence that Kandahar was an Alexandria.  But by 1979 the Soviet Army had invaded Afghanistan and excavations at Old Kandahar had to cease. Fraser’s Cities of Alexanderwas finally published in 1996. The CSAD holds the notes, photographs and squeezes from this phase of his research in Afghanistan  many of which are available online.

The full Index of the collections of photographs in the digitised Peter Fraser Archive can be found here.