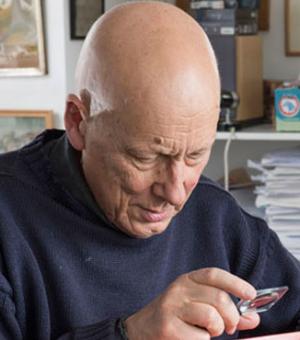 Dr Roger Tomlin approaches epigraphy as a series of small puzzles, which the epigrapher must pose and seek to solve. He is described by colleagues as "an imaginative historian who always grounds his imagination in a mastery of technical detail, allied to flashes of intuitive insight." His interest in codes and writing came across clearly in his work on Roman curse tablets (excavated in Bath in 1979). He has also worked on the Carlisle writing tablets as well as in the latter stages of the project to decipher stone inscriptions from the fort of Vindolanda. In 2013 he was approached by the Museum of London Archaeology (MOLA) to translate Roman writing tablets that were being dug up from the site of the Bloomberg Building in the City of London. His book, London's First Voices, presented published editions of the 90 tablets he had been able to decipher out of a total of 405 tablets dug up from the site. In 1975, whilst working at Durham University he was approached to succeed R.P Wright as the editor of Roman Inscriptions of Britain, a position he continues to hold to this day.  He was responsible for the revision of Vol I and the publication of Vol III (additional stone inscriptions discovered since Vol I) and he is currently collaborating with Prof. Alan Bowman on Vol IV (Romano-British writing tablets).