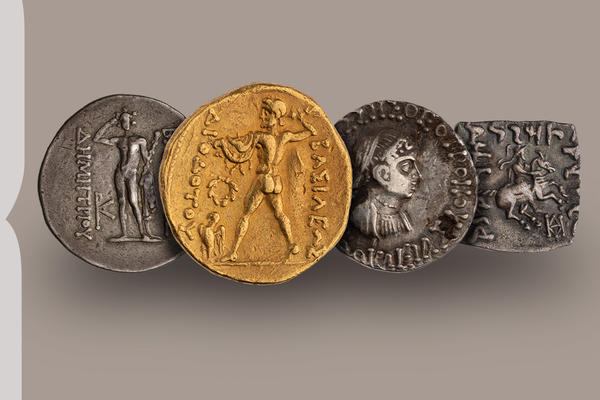 The Centre for the Study of Ancient Documents (CSAD) in collaboration with the Heberden Coin Room of the Ashmolean Museum has won a grant of £250,000 from the AHRC to fund an international collaboration with American Numismatic Society (ANS) in New York on the new OXUS-INDUS project. The award comes through the New Directions in Digital Scholarship in Cultural Institutions program created by the AHRC and the National Endowment for the Humanities (NEH) in the US, intended to fund trans-Atlantic co-operative projects. In Oxford, Prof. Andrew Meadows and Dr. Simon Glenn will be working with their partners Dr. Peter van Alfen and Ethan Gruber at the ANS, along with Dr. Gunnar Dumke at Martin-Luther-Universität Halle-Wittenberg in Germany,  and Dr. Asma Ibrahim at the State Bank Museum of Pakistan to create a new online typology and research tool for ancient Graeco-Bactrian and Indo-Greek coinage.

For many of the rulers of the Graeco-Bactrian and Indo-Greek kingdoms, which existed between c. 250 BCE and the beginning of the first century CE and covered areas of modern Afghanistan, Turkmenistan, Uzbekistan, Tajikistan, Pakistan, and India, coins are often the only surviving evidence of their existence. Formed in the wake of Alexander the Great’s incursion into the region, these kingdoms remain some of the least understood and most understudied political and social entities of the ancient world. Indeed, only eight of these kings are known from literary, epigraphic, and archaeological sources, while over 40 can be identified on coins alone, an astonishing disparity in source material that underscores the importance of the numismatic evidence for our understanding of these early rulers and their interactions with those they ruled.

Tens of thousands of these coins exist today, dispersed in collections, both public and private, across the globe, not just in Europe, the UK and US, but, rather importantly, in Afghanistan, Pakistan and India as well. With standard reference works out of print and only existing in French and English, it is difficult for scholars,curators in cultural institutions holding these coins, and law enforcement agencies tasked with the combatting of the illegal trade in antiquities, to engage with the material at a number of different levels. Lacking, in many cases, basic and accurate typological information describing where, when, and who produced the coins, the potential of these collections to serve as historical resources and points of reference remains currently locked. The OXUS-INDUS project aims to resolve current cataloguing, identification and collection accessibility problems by providing a, freely accessible, and technologically sophisticated Linked Open Data web-based portal that will offer a new, up-to-date typology of the coins. This new tool with interfaces available in more than 20 languages, including most modern European languages as well as Arabic, Urdu, Hindi, Dari and Pashto, will also allow access to the images and data of thousands of coins, initially incorporating the major collections of the Ashmolean Museum, the ANS, the Bibliothèque nationale de France, Fitzwilliam Museum, Cambridge, Leeds University Library, the Staatliche Museen zu Berlin, and the State Bank of Pakistan.

Project Update: We are pleased to announce that the online resource Coins of the Bactrian and Indo-Greek Rulers (BIGR) is now available online.